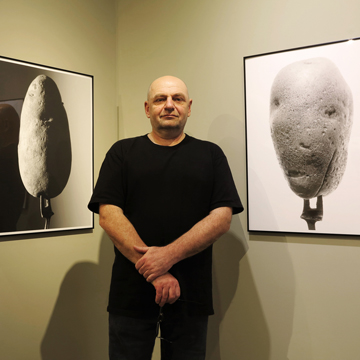 Andrzej Maciejewski was born in 1959 in Poland. He studied at Warsaw College of Photography (Poland), Polish Society of Art Photographers School (Poland) and College of Photographic Arts in Ostrava (Czechoslovakia). In 1985 he moved to Canada. He worked as a commercial photographer in Toronto until mid-1990’s. Then he moved to the countryside in Eastern Ontario and devoted himself entirely to his art. He published 5 books: Bread (1996), Toronto Parks (1997) After Notman (2003), Garden of Eden (2012) and Weather Report (2016). „After Notman” was a bestseller in Canada and has been widely discussed internationally. His work has been exhibited at many group exhibitions and at over 60 solo shows in Canada, USA, Poland, UK, Germany, Norway, Latvia, Finland and Uganda. His works may be found in many private and public collections, including National Gallery of Canada and Minneapolis Institute of Art. He teaches photography in Fleming College, Haliburton School of Art and Design in Canada.